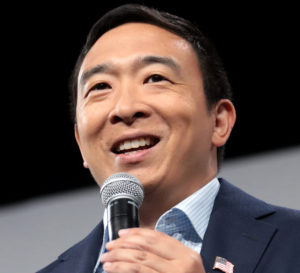 For the first time this year, there was not a single black candidate on the stage at Thursday’s Democratic presidential debate. In fact, Andrew Yang, the only nonwhite participant was the first to address the issue of lack of diversity among the assemblage of seven contenders at the forum at Loyola Marymount University in Los Angeles.

When asked about the lack of racial representation and the message sent to voters of color that the field remains “overwhelmingly white,” the Asian American entrepreneur responded that it was “both an honor and disappointment to be the lone candidate of color on the stage tonight. I miss Kamala, I miss Cory — though I think Cory will be back.”

Yang was referring to that fact that US Sen. Kamala Harris of California, who met the criteria to participate in Thursday’s debate, bowed out of the presidential race two weeks ago. And US Sen. Cory Booker of New Jersey, who continues to run for the Democratic nomination, has been railing against the Democratic National Committee’s debate qualifications that excluded him from joining the other candidates on the stage and has repeatedly cited over the past few weeks that “there are more billionaires in the race than black people.”

All candidates, however, are mindful of the importance of gaining support from black Democrats as the contest enters primary season in less than two months since none can capture the party’s nomination without that voting bloc. Throughout the campaign, Biden continues to hold a vise-like grip on the black Democratic vote.

Race and Diversity On Menu of Debate Topics

Although Booker and former Massachusetts Governor Deval Patrick, the only other black presidential contender in the race, were absent from the discourse on issues that included impeached President Trump’s policies, immigration, climate change and health care reform – among others – race and inclusion were still on the menu of topics.

In continuing to discuss the lack of diversity, Yang added that although he “grew up the son of immigrants, and I had many racial epithets used against me as a kid,” African Americans and Latinos have “something much more powerful working against them than words. They have numbers.” He then cited that the average net worth of a black household is only 10% and that a black woman was 320% more likely to die from complications in childbirth, telling the audience that “these are the numbers that define race in our country.”

He then invoked the message of slain civil rights leader Martin Luther King in sharing a solution tied to his universal basic income platform: “The question is, ‘Why am I the lone candidate of color on this stage?’ Fewer than 5 percent of Americans donate to political campaigns. You know what you need to donate to political campaigns? Disposable income. The way we fix it, the way we fix this, is we take Martin Luther King’s message of a guaranteed minimum income: a freedom dividend of $1,000 a month for all Americans. I guarantee if we had a freedom dividend of $1,000 a month, I would not be the only candidate of color on this stage tonight.”

When asked question a question about race, Sanders focused on climate control. “People of color, in fact, are going to be the people suffering most if we do not deal with climate change,” he said before being more expansive in his answer. “By the way, we have an obligation up here, if there are not any of our African-American brothers and sisters up here, to speak about an economy in which African-Americans are exploited, where black women die at three times higher rates than white women, where we have a criminal justice system which is racist and broken, disproportionately made up of African-Americans and Latinos and Native Americans who are in jail. So we need an economy that focuses on the needs of oppressed, exploited people, and that is the African-American community.”

Asserting that “we are not going to be able to succeed in the world if we do not invite everyone to be part of our economy,” Klobuchar commented on the need to ensure African Americans gain unfettered access to the ballot box. “What would I do? As one of the leaders on voting in the U.S. Senate, one, stop the purging. As Stacey Abrams said, you do not stop having your right to assemble if you don’t go to a meeting for a year. Because you don’t go to a church or synagogue or mosque for three months, you don’t lose your right to worship. You shouldn’t lose your right to vote.”

She added: “I would pass, as president, my bill to register every kid in this country when they turn 18 to vote. That would make all of these discriminatory actions in these states go away. And I would stop the gerrymandering, in addition to the agenda of economic opportunity, because as Martin Luther King said, “What good is it to integrate a lunch counter if you can’t afford a hamburger?”

Steyer, who has maintained that he sent a letter to the DNC advocating for change of the debate criteria after Harris’ departure, took direct aim at Trump, declaring that racism is at the heart of Trump’s politics” and using immigration to “inflame his base I think it’s important to note that this president is not against immigration, he’s against immigration by non-white people.”

In a post-debate interview with PBS, Steyer said that it was not only important to have inclusive representation on the debate stage but maintained that it is  vital for the Dems to have a “diverse ticket under all circumstances.”