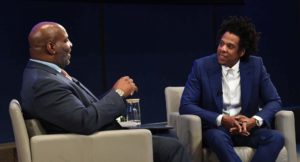 Shawn “Jay-Z” Carter opened up about his final conversation with Kobe Bryant just weeks before the NBA legend’s untimely death.

While speaking at Columbia University on Tuesday, Carter revealed that he and Bryant celebrated New Year’s at the hip-hop mogul’s home.

“Kobe was a guy that looked up to me and we’ve hung out multiple times,” he said. “He was last at my house on New Year’s, and he was just in the greatest space that I’ve seen him in. One of the last things he said to me was, ‘You’ve got to see Gianna play basketball.’ And that was one of the most hurtful things because he was so proud.”

Weeks later, the 41-year-old NBA superstar and his 13-year-old daughter, Gianna, were among those killed in a tragic helicopter crash in Los Angeles on Jan. 26.

“Just a great human being and was in a great space in his life.” pic.twitter.com/QJ1PTqkPmq

In addition to addressing his last conversation with Bryant, Carter also addressed public speculation about why he and his wife, Beyoncé, remained seated while Demi Lovato sang the national anthem at the Super Bowl on Sunday. Rather than sitting in protest, the business tycoon revealed that they were marveling at Lovato’s performance.

We were in “artist mode” and focused on elements like, “Did [the] mic start? Was it too low?,” he explained. He added that Beyoncé was explaining to him how Lovato was likely feeling at that moment. “The whole time we’re sitting there and we’re talking about the performance. And then right after that, Demi comes out, and we’re talking about how beautiful she looked and how she sound[ed], and what she’s going through in her life for her to be on the stage, and we’re so proud of her.”

The rapper-turned-billionaire went on to point out the diverse array of talent that he helped assemble for the Super Bowl halftime show, which included Jennifer Lopez and Shakira. “We were making the biggest, loudest protest of all. Given the context, I didn’t have to make a silent protest,” he said. Carter became a co-producer of the halftime show after his company, Roc Nation, partnered with the NFL last year.

Carter’s comments came during the launch of his new lecture series at Columbia University. The Shawn “JAY-Z” Carter Lecture Series was formed under the IVY league school’s African American and African Diaspora Studies Department (AAADS) to honor the Brooklyn-born rapper, entrepreneur, and philanthropist.

“The Carter Lecture Series, the first named and endowed program in our Department, sits at the heart of our mission to create and sustain an intellectual community bridging scholarship, teaching, and public life,” said Farah Jasmine Griffin, chair of AAADS Department, in a statement. “The annual series will bring to our campus, our neighboring community and the City of New York the most innovative thinkers, activists and artists who are making outstanding contributions to our understanding of, and appreciation for, the thought, arts and social movements of the black diaspora.”

She added, “This unique lecture series, named for one of our most important and influential cultural figures, helps to establish the African American and African Diaspora Studies Department at Columbia as a major intellectual and cultural center.”